Whether We Sell 1 Item Or All, This Has Not Been A Waste Of Our Time 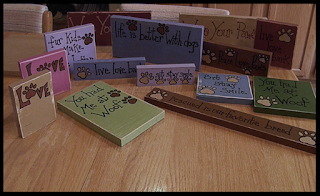 I want to apologize for the lack of blog posts over the past few days. We've been super busy preparing for the Annual Spring Festival and Craft Show event on May 20th. I'm running on less than 3 hours of sleep a day. By the end of the day, despite my best efforts to update, I'm too exhausted to string words together to make a sentence. I've actually dozed off in the middle of typing a blog post.

Despite all, we are almost there! The wood stuff is done except for the hardware we have to install. That includes brackets on the backs and hooks for the leash and pup apparel holders.

This weekend, we're baking lots of biscuits love for the event.

Next week, we'll be adding the final touches, bagging biscuits, waiting for our new banner to arrive, and making a few signs.

Our goal is to have everything done by early Friday evening and have enough time to kick up our feet and paws for a few hours to relax before the big day.

We're excited for this event, but we're also a bit nervous.

It's our first non-pet event.

It's the first event in the town we live in.

It's also the first event where we've offered other stuff aside from our Bodacious Peanut Butter Dog Treats and "hooman" cookie love.

Where it's a non-pet event, it could go either way.

In the here and now, preparing for this event has taught us a few things.

It has opened our eyes.

It has motivated us to do more and make more.

And, we've proved to ourselves that we can do it.

Regardless of the outcome, we've gotten a lot out of the journey.

It's been a learning process.

Whether we sell 1 item or all, this has not been a waste of our time.

We're almost there!
Posted by Lisa and Lisa at 7:00 PM