We Raise Our Glasses. With Love. With Honor. With Peace. 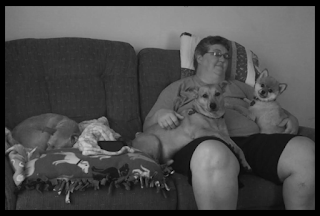 Our goal was to have our Bodacious Biscuit Love Bin launched this week to commemorate the 3 year anniversary of spreading the biscuit love. Sadly, that has been delayed. On Monday, Lisa received a phone call from Mom. Her Grammy wasn't doing too well and there was little hope she'd pull through. Although her health had been deteriorating slowly for some time, we were a bit shocked at the sudden turn of events. Our focus shifted on making arrangements for Lisa to see her Grammy and spend time with her family.

A few days later, yesterday, Lisa's Grammy passed away. Our hearts were heavy. I pulled away from the virtual world and most everything was put on hold for a couple of days.

During this time, I thought back to last July when I published a post about why we had fallen so far behind with Bodacious Biscuit Love stuff.  At the time, my Grammy had passed away. Less than a week later, a dear friend of ours lost her battle with cancer. Less than a week after that, my Grandpa passed away.

A few months prior we had lost another dear friend to cancer. A couple of months after publishing the blog post, another friend of ours passed away.

It was a difficult year to say the very least.

Earlier this year, we've lost a couple of loved ones due to illnesses.

It's never easy. Ever.

Lisa and I put in a great deal of effort to keep things on track and reach our goals on time. At times, it's difficult because of work schedules, but we put forth the effort and it all works out.

However, occasionally, something happens and we need to take a few days to exhale, travel, grieve, and allow ourselves to simply be in the moment.

That's where we are right now. Taking a time out for a couple of days.

We'll be raising our glasses to Grammy. With Love. With Honor. With peace.