Our Recipe For Pumpkin Bread Is Both "Hooman" And Pup Friendly 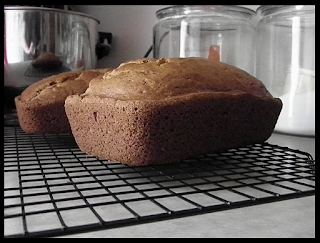 I've white knuckled a personal golden rule for many, many years. That rule included no pumpkin spiced anything until the first official day of fall. However, I fell off the wagon. I caved. Even though it's still the Summer season, I'm SO ready for Fall. I've broken all of my rules. I don't care.

Today, I made a double batch of my homemade pumpkin bread. During the fall and winter months, pumpkin bread, apple cinnamon bread, and cranberry bread are staples in our Bodacious household. These recipes are ones I've used for years, however, I've altered them a bit so they're both "hooman" and pup friendly.

I haven't made my apple cinnamon or cranberry bread...yet. However, I've got apples and cranberries sittin' in the refrigerator ready to be used.

For now, if you'd like to whip up some homemade pumpkin bread, you can find my recipe right here.

When making this recipe, I use cinnamon only. Do not use pumpkin spice or nutmeg. Cinnamon. Only.

Nutmeg is toxic for pups.