Lyme Disease Is Real. Ticks Are Tiny. No Effort Is Too Great. 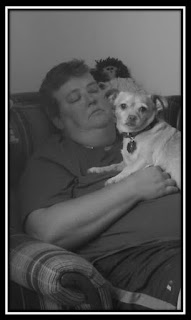 Close to the last week of August, Lisa complained about a spot on her head that was itchy. I checked the area and saw nothing out of the ordinary. The following week, on a Monday, she woke up with a headache, flu like symptoms, extreme fatigue, and joint pain. At first, we thought she had a touch of the summer flu virus that's been going around. Lisa took a few doses of antibiotic she had leftover, from a severe cold over the winter, accompanied with Advil and Dayquil. Nothing worked. The headache was persistent.

A few days later, that Thursday, I put my foot down. Make. An. Appointment. With. Your. Doctor. After an examination, she was immediately treated for Lyme Disease and put on a regimen of antibiotics and steroids for the next month. She was also scheduled for a follow up appointment the Tuesday after Labor day.

I cancelled the few plans we had over the long, Labor Day weekend so Lisa could rest and the medication could work its magic. She had no energy and the headache wouldn't go away.

On Tuesday, September 6th, Lisa went to her follow up appointment. All the tests came back positive for Lyme Disease. Her doctor examined the spot in the back of her head where it's still sore. The area is red and inflamed. That's where the tick bite was. To make matters worse, the bite is on or by a nerve. More than likely, Lisa scratched the tick off so it wasn't removed completely.

There was no bulls-eye rash.

She has another appointment in two weeks.

I'm sharing this with all of you because regardless of how diligent you are with tick preventative, this can happen. Over the past 5 years, we have taken strict measures with tick preventative all the way around. With our fur-kids. With us. We use Revolution on our fur-kids every month and, after Lisa spends an afternoon doing outside work, I do a body scan before she gets into the shower.

However, despite all efforts, she was bitten. On the head. Ticks are tiny. They can latch on to a strand of pup fur or "hooman" hair and go undetected. Both pups and "hoomans" are tick taxis.

At this point, we're keeping our fingers and paws crossed for the best. Right now, the immediate concern is where Lisa was bitten. It was on or by a nerve on her head. The additional prescription steroid should help with the swelling and ease the headache. And, we're hoping, it'll prevent long term issues such as neuropathy.

For the next month or so, Lisa will have to take it easy. No yard work. No extreme heat. No sunlight. Limited heavy duty work. Lots of rest.

Until then, check your pups. Check yourselves. No effort is too great.