This Load Of Biscuit Love Left The House Thursday Afternoon 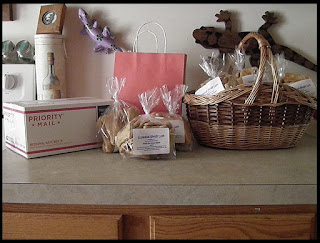 To those who have asked, yes we are still baking biscuits every week and spreading the biscuit love. Just because we're making changes and shifting our focus closer to home doesn't mean we've halted the baking. We've been baking biscuits and spreading the biscuit love every week since October of 2013 and we're not going to stop.

This load of biscuit love left the house on Thursday afternoon. And, while out and about, we made a pit stop at the Plainfield Pound to deliver biscuit love to a sweet senior girl, Scarlett. She was found roaming and, as of yet, no one has called to claim her.

Tomorrow, we'll start baking for the week ahead! And, it looks as if the temperatures are going to be in the low to mid 80's. That'll be a nice break from the scorching temperatures we had the week before last when the heat index was 110. We had a hard time keeping the house cool even with all of the air conditioners going.