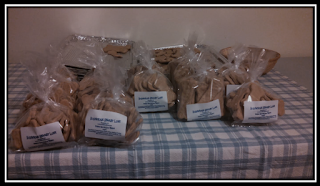 Last month, there were several posts published about our Bodacious Biscuit Love Evolution. If you didn't get a chance to read 'em, you can catch up here, here, and, here. In short, we've made, and are continuing to make, some changes based on trials and tribulations over the past almost-3-years. Some of those changes include shipping, focus, our Bodacious Raffle Baskets, pulling closer to home, and helping more people in our community.

Since publishing those posts, we've had quite a few people reach out with support, stories of their growing pains, tips and advice, etc. I didn't expect such a response, but it's been awesome. I've enjoyed hearing the stories. The bits o' wisdom from people who have years of experience doing "this sorta thing" has been beyond helpful. As with any mission, there's always room to learn and grow.

And, I totally snagged the term "growing pains" from someone who sent me a heartfelt message shortly after publishing all 3 posts.

One of the suggestions that trickled in was, "You should hook up with a local rescue group or animal organization. That way, you'd be included in more events, fundraising adventures, and the word would spread far and wide about what you do."

When we first started out, we did just that. Twice. It wasn't to be included in more events and fundraisers or to get exposure. We simply wanted to do more in the world of rescue in addition to spreading biscuit love.

That didn't last long. In fact, I addressed this in one of our Bodacious Biscuit Love Evolution posts...

People can be mean. I know I already mentioned that people will try and make you look bad and hit beneath the belt, but I feel this area needs to be addressed. All the way around, it sucks and this is why we do not affiliate ourselves directly with any rescue groups or organizations. We've done that twice and, each time, learned our lesson the hard way. No matter how cordial and professional you are with separating yourself, it's often met with haste and retaliation. You go from having a large group of people who support you and don't miss an opportunity to tell everyone how awesome your biscuits are to a large group of people hating you and sabotaging your efforts.

As I read this kind lady's suggestion about "hooking up with a local rescue group or organization" I was reminded of something that happened a couple of years ago shortly after we severed ties with the second animal organization.

One of the ladies, from the first group we were members of, bought biscuits for her pup almost weekly. Her pup loved our biscuits. Over time, her orders got smaller and less frequent. We learned she was struggling financially. In the weeks ahead, we gave her bags of biscuits "on the house."

Our friend found out about this and she was pissed. She felt as if we were betraying her because we were giving biscuits to a member of the group that had "done her wrong."

Needless to say, shortly after, the ties of friendship severed. However, before that happened, I tried to explain to her that we don't discriminate who we donate biscuits to. Sure, the woman is a member of a rescue group that left a bad taste in our mouths, but that had nothing to do with us donating biscuits so her pup could continue to have fresh baked biscuits.

For us, it's all about the dogs. Our experience with that rescue group, or the happenings after we parted ways, had nothing to do with this woman's pup. Nothing.

This is one, out of many, reasons why we've chosen to distance ourselves from rescue groups and organizations.

There's too many politics, too much drama, backstabbing, arguing, etc. While all of that crap is going on, people tend to lose focus. That focus are the animals.

Lisa and I have distanced ourselves from the drama, we do our own thing, and we will continue to do just that with the help and support from our Bodacious Community and beyond. We don't need to be affiliated with or members of a group or organization. And, we certainly will not put ourselves through what we did a couple of years ago.

It's all about the animals.