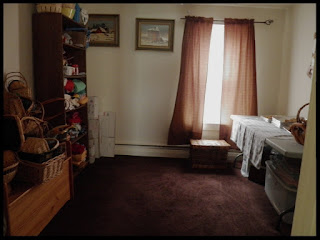 The crazy month of May has begun. I'm taking the month of May to catch up on unfinished projects and to tackle the lengthy "to-do" lists on my desk. So far, it's been quite productive. Right now we're working on revamping a display at one of our locations, looking at a couple more possible locations, organizing address files, uploading photos for the recipes we've created, updating this blog site and launching a second blog site. Lots of work, but we're feeling accomplished!

On Mother's Day, we had plans to relax and unwind. However, after spending the morning playing with the fur-kids and doing a little housework, we weren't quite ready to put our feet up just yet. There's been a big project sitting on the back burner for several months.

The plan for the biscuit room was to move things around, organize craft stuff for the Bodacious Blanket, Tote and Bandanna love, organize the closet, create a little nook to put the shipping boxes for easy access, and distribute the bags of blankets and towels we had in the corner.

That's exactly what we did.

Three hours later, it was done! The photo tells all. Everything is organized, has a place and there's a little extra space if anyone donates food and other supplies for us to distribute.

Shortly after completion, we made a fabulous Mother's Day dinner, put our feet up and enjoyed family snuggle time and a movie!