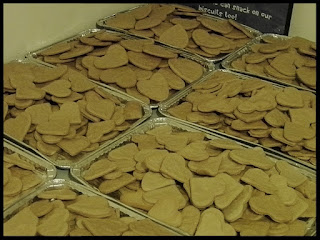 For those who live in Connecticut, especially in our neck of the woods, we've had a fairly mild winter including some record breaking highs. I'm not complaining. A week or so ago I opened the windows. It was that warm. However, and I've been saying this all winter, our luck is going to change. When it does, it's not going to be pretty. That's exactly what happened on Friday.

I honestly had no idea we were going to get blasted with a quick hitting fierce storm. It wouldn't have been so bad except the snow was wet and heavy. Eastern Connecticut, including us, got the brunt of the storm. At 9 in the morning, I was outside, on the front porch, and that's when I heard the first large limb of a tree fall. It's loud.

And yes, I said first. There were many throughout the afternoon.

An hour later, the power went out. Two minutes later, it was restored. Out again. Restored. I panicked. I had 5 meetings that afternoon and we needed to start the process of baking heart-shaped biscuits.

We were extremely fortunate. From the outage map, most areas in eastern Connecticut were without power and would be for some time. Trees were down everywhere. Power lines were drooping. We were without internet for over 24 hours.

With our power intact, baking began Friday evening and it's still happening now. This is only a fraction of the heart-shaped biscuits we've baked. We're not done yet. Another 8 hours should do the trick.

I hear we're going to get blasted again with more snow. Two storms? We're keeping our fingers and paws crossed it's the light, fluffy stuff. Please.
Posted by Lisa and Lisa at 8:00 PM