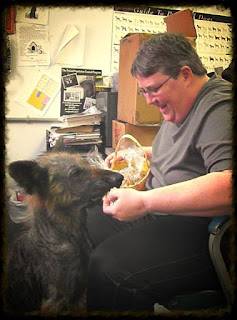 In April of 2014, we featured a sweet pup named Amos. He was found abandoned, emaciated and with a severe case of mange. About 90% of his fur was gone. The day after the incredible people at the Preston Pound took him in, we visited sweet Amos armed with lots of biscuit love. He gobbled up our biscuits with gusto. A week later, we delivered an Easter Basket filled with Bodacious Easter biscuits. Plain and swizzled.

Amos, despite what he had been through and endured, was a gentle soul. We had to hold back tears the first time we visited him. Seeing a pup with fur who's emaciated is heartbreaking, but one with no fur, it amplified the severity. You could see his ribs and hipbones. He had a ring of fur that went around his face. And when he looked at you, his eyes spoke a thousand stories.

He received immediate medical care and both Patty and Kris-Ann, from the Preston Pound, took care of him day and night. He lived like a king while at the pound. Amos caught the attention of many and donations of beds and blankets rolled in. His nickname was Famous Amos. Rightfully so.

A couple of weeks later, he was adopted by a phenomenal woman who has dedicated her life to rescuing animals. She owns a horse rescue and has lots of stables and a huge field. She took Amos in and loved and cared for him. A few times, we visited. Amos's fur was growing back and he looked amazing.

Sadly, a few days ago we were informed that Amos had passed away. As quoted from Preston Pound Animal Control:

"We received word recently that Amos, the German Shepard who was found as a stray last spring, malnourished and inflicted with mange, passed away from heart failure this week. Amos had many FB friends while he was at the Preston Dog Pound.

His new adoptive owner, Sue, gave him lots of love during the final year of his life. Special thanks to CT Animal House,Teresa Chirico and Tammy, Bodacious Biscuits, & Megan Hoffman (who made him the beautiful dog blanket in the picture and sent it across the U.S.!) Thank you to everyone who shared his picture and helped find his final forever home!"

Our hearts were heavy. Amos touched the lives of many and was loved by all. Sweet baby Amos will never be forgotten. We send lots of light and love.
Posted by Lisa and Lisa at 12:05 PM