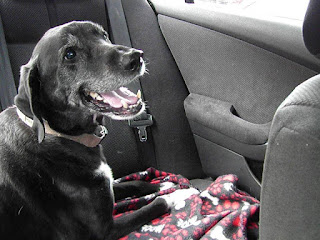 Yesterday was like any other Monday. Well, the first hour. Get up. Take fur-kids out. Coffee. Check emails and other work related stuff. More coffee. Dishes. Prep the kitchen area for biscuit baking. More coffee. Fill flour canister. Open new jars of peanut butter. Set up Chrome Book on kitchen table. I was about 15 minutes away from mixing the first batch of biscuits. That's when I saw him.

Senior pup. Owners moving. Can't take dog. Will be euthanized in less than 24 hours per order of owners.

After reaching out to a handful of contacts, a miracle happened. I spent quite a bit of time on the phone. We had a placement. Could we transport? Not a second of hesitation. Yes. Absolutely. Whatever it took. The location was over an hour and a half away. Not a problem. Lisa was due to get out of work in an hour. I showered and got ready for our journey.

We left around 3. Construction on the highway delayed our arrival by almost a half hour. Once we arrived at our destination, we collected his food and paperwork. Then, the freedom ride. It was emotional. The entire day had been filled with emotions. Mr. Senior Pup stretched out in the back and snacked on biscuits. He was a happy boy.

By 7 we were at our 2nd destination. The new chapter of Mr. Senior Pup's life. We spent a little time with him before leaving and left several bags of biscuits. Once back in the car, we exhaled. He was safe. Although the situation in its entirety tugged at my heartstrings, there was a sense of relief. Mr. Senior Pup was safe. Comfortable. Already loved by the few who had met him.

It was almost 9 p.m. by the time we got home. We were both drained. Lisa and I sat on the sofa for a bit with our fur-kids. Lots of hugs and snuggles. It was one of those moments where nothing needed to be said. After a snack for the "hoomans" and pups, Lisa went to bed. The fur-kids followed.  I made a fresh cup of coffee. Another exhale. I made the decision to start baking in the morning. The overnight hours were spent tackling the many virtual piles of desk work.

Yeah, I'm a day behind. Displays will be stocked on Thursday and Friday rather than Wednesday. Biscuit love will be spread slightly later than usual. However, every second of yesterday was worth it. I needed yesterday. Once in a while, the universe shifts and things just happen. I woke up with a mission to bake, package, write and organize the biscuit room. But, the universe and fate had other plans.

What happened yesterday amazed us for so many reasons. A handful of people came forth to assist in the rescue of Mr. Senior Pup. We're extremely grateful to be a part of such an incredible community of like minded "hoomans." It was the effort of many who made this rescue possible. After all was said and done, we were recharged. More determined than ever to work harder and push ourselves to spread more biscuit love, extend our bodacious community, make more blankets, bandannas and totes, etc.

We want to extend a huge bodacious thank you to everyone involved with yesterday's rescue. Great things are done by a series of small things brought together. I raise my coffee cup. Face forward. Onward march.