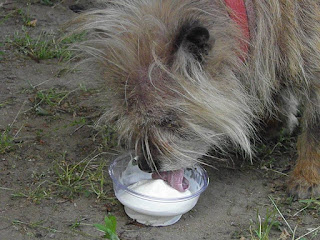 In May, something happened. It changed me. Us. We assisted in a local rescue involving two senior pups. The rescue was emotional. Lots of puzzle pieces didn't fit. But, the plea from a trusted source tugged at our heartstrings. I couldn't shake it. Despite post after post, there were no immediate replies or solutions. Senior pups. Not exactly the most desirable for "most" rescue groups.

For the record, Lisa and I applaud and support those rescue groups who rescue, what we refer to, as the "undesirables."

After a couple of hours, lots of phone calls, ironed out details, we all coordinated the rescue. It happened with the assistance of three other people. I didn't sleep that night or the morning of. As most of you know, I nap for a few hours in the morning after being awake on the overnight to bake, write or work. My phone let off various beeps and alerts. Texts. Replies.

By that afternoon, all was said and done. These two pups were safe and being transported. That afternoon, Lisa and I delivered biscuit love and spent time with these two pups. The following day, they were examined at a local veterinary hospital. One was given a good bill of health, minus the typical "senior pup" ailments. That pup was adopted out within a week.

The other pup...the news was grim. Terminally ill. The ones involved in her rescue went above and beyond. She was living like a queen where she currently resided and given the respect she so rightfully deserved. Lisa and I participated in a last minute event that weekend and donated all proceeds to help cover the medical costs for both the rescued senior pups.

Freida has since found a fur-ever home to live out the rest of her days...like a queen.

A few days after the initial rescue, we visited the local shelter and took Freida out for ice-cream. She was so excited. We were too. After arriving at our destination, we parked in a shady area. Freida wasn't able to walk great distances. Her determination to tour and sniff the grounds was shortened by the extreme early-summer heat. Lisa and I accommodated her needs.

I sat with Freida in the shady spot. Lisa went to the building to get ice cream. After a short time, she returned. Freida had no idea what ice cream was. I dug my finger in the cold confection and held it to her mouth. She sniffed. Licked. It didn't take her long to lick her entire cup of vanilla ice cream with gusto. Once her cup was licked clean, she begged for our cones. We obliged.

After we enjoyed our frozen confections, we took Freida for a walk on the property. Slow. Her tiny legs, and the masses in her abdomen, made it difficult for her to keep up. One step for us was ten for her. We patiently waited and offered words of encouragement for her to continue forth. Freida's tail wagged. She was excited to be out and about.

It was then I spotted them. Man. Two children dressed in high-priced outfits. I've been in my profession long enough to know the difference between Walmart and Gap.

Seconds later, I heard it. The children.

"Daddy, that dog is ugly. What is wrong with it."

The man put his hand on each of their shoulders, turned the children's faces in opposite directions and said, "Don't look at it. We're getting ice cream. Don't pay attention to it."

A few minutes later, Freida tired out. We turned around towards the car.  I didn't lose sight of the man and 2 children. Once Freida was situated in the backseat and comfortable, I hesitated. Lisa was already in the car. I wanted to shut the door and confront the man. In a friendly manner. After all, it's all about how you present something, right?

"Sweetie, you getting in? What's wrong? You okay?"

No. I wasn't okay. The man's response to the girl's upheaval at Freida's appearance represented what was so evident and obviously wrong with today's society. If it's ugly, turn away. If it appears "flawed" or damaged, turn away. Sadly, we've become a society who bases judgement solely on appearance. Size. Scars. Moles. Stretch marks. Physical challenges. Twitches. Hair. Color. Tics. Shape. If appearance doesn't fit comfortably in the realm of what society deems as cute, pretty, acceptable, etc...turn away. Ignore it. Stare. Shift our eyes to the ground. Shake our heads. Judge.

Once again, I hesitated for a few seconds before getting in. I realized my urge to confront him was fueled by years of being judged. And, seeing others being judged whether "hooman" or animals in need.

As a society, we're conditioned to be attracted to pretty, flawless, attractive, cute, unbroken, etc. Lisa and I both have been in the world of rescue, adoption, fostering, animal shelters long enough to know what people are attracted to the most. If you were to put Freida side by side with a puppy and let loose a group of people, allowing them to gravitate towards their preference, young or old, it's fair to say which pup would attract the most attention, right?

It breaks my heart. I witness this gravitation towards the "cuteness" every single day. We are well aware what pups get the most attention and who are adopted out the quickest. And, to stir the shit pot a little more, a handful of rescue groups take advantage of society's preference for the young, cute, highly adoptable animals.

At that moment, while the taste of ice cream was still lingering in my mouth and Lisa and Freida were waiting patiently for me to get in the car, I wanted to confront this man and the girls. Gently. Non-hostile. Freida had a story. A remarkable one. This man had no idea what she had been through. What we all had been through to rescue her. The tears. Time. Efforts. He had no idea she was terminally ill.

But, then again, I knew all too well, he'd stare at me too. Probably with disgust. He didn't know my story either.

Email ThisBlogThis!Share to TwitterShare to FacebookShare to Pinterest
Labels: Freida