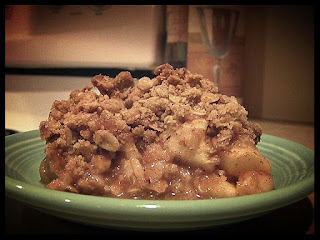 The other night I broke every rule in my "bodacious kitchen law" book. I made apple crisp in August. This is a dessert I make during the fall and winter months. By spring, we're sick of it. During the summer months, I don't even want to think about apple crisp. However, a neighbor friend gave us a bag of fresh picked, early autumn Wabi Sabi apples. I needed to use 'em up. I don't like to waste food. Later that afternoon, Lisa peeled the apples, removed the bruises, diced and...I made apple crisp. The apple scraps went to the chickens across the street.

Two hours later, we were enjoying fresh made apple crisp. The fur-kids were at our feet quietly gazing at us. Lisa and I, after taking a couple of bites, would fork a piece of apple and share with the fur-kids. We always leave a little on our plates for them to enjoy as well. While all of this was happening, I couldn't help but think of a casual gathering we had attended a year or so ago. A few pups were there. Covered dishes and salads were situated on the counters. Paper plates. Plastic utensils. Eat when you wanted to.

At one point, while feasting on raw veggies and dip, I broke up a carrot to divide between the pups.

I always ask before offering food or treats to any pup, however, I had been here before and had always been given the green light.

Our fur-kids would do cartwheels for carrots. It's one of their favorite snacks. And, they're healthy for the pups. All 3 pups sat and gently took their chunk o' carrot when offered. Crunch. Crunch. Crunch.

"Oh, we don't give our dogs people food anymore. It's not good for them."

I was handed a bag of doggy meat sticks. I recognized the brand. They smelled horrid. The list of ingredients was a mile long. Meat by-products. Fillers. Blah. Blah. Blah.

And this shit is better for the pups than raw carrots?

Our fur-kids are only allowed "people food." They get 2 meals a day and several snacks...all homemade in our kitchen. Meals consist of baked lean meats (mostly skinless chicken breasts), steamed veggies, mashed sweet potatoes, whole grains, raw vegetables and fruits, Greek yogurt (twice a week), beans, pumpkin, egg, etc. And, they get a multivitamin. Snacks are usually our biscuits, raw carrots, baked chicken chunks or apples. On occasion, in moderation, we share small bits of apple crisp, pumpkin bread, cranberry bread, peanut butter cookies, etc. Our baked goods (with the exception of chocolate) are all made with pup-friendly ingredients.

On occasion, when we've had people over for snacks or dinner, they've been slightly shocked when our fur-kids nosh on raw carrots or pieces of apple. It's like a new concept to them. They don't know quite how to process it.

"Dogs can have raw fruits and vegetables?"

"How did you get your fur-kids to eat raw fruits and vegetables?"

Yes. It's quite common. Yes. And, they just eat it. Each of their canine palettes  Coco prefers most of his fruits and veggies cooked. Sophie and Lobo like both raw and cooked.

Take a little time and research dog-friendly fruits and vegetables. There's a lot to choose from. Experiment. You may just be surprised.