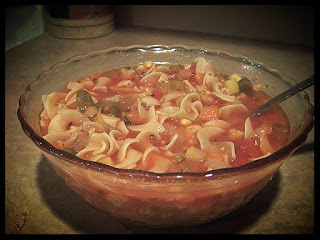 It's Wednesday. I've done nothing. Biscuits aren't made. The guilt is weighing heavy, however, the simplest of tasks is sucking what little energy I have from my body. I needed a nap after making a cup of tea. No joke. Today is Coco's 3 year anniversary with us and making his cupcakes took all afternoon. Hours. Whipping up one of his favorite dinners required a half hour rest period between each item. I feel like the world's worst Mom and wife.

Apparently, this nasty summer stomach-bug-intestinal-virus thingy has been spreading like wildfire. Saturday I was fine. Sunday I was fine for most of the day and evening. Around 9 p.m. I felt a little nausea brewing. No big deal. Two hours later, it was a big deal.

For the next 8 hours I was violently sick. I'll spare you the details. What I will tell you is I've only been that sick one other time in my life. I was 18. Food poisoning. Mexican food. Party. Catered. That required a trip to the hospital for some fluids via IV. This time around, no IV. I did wake Lisa up in the wee hours of the morning, with hesitation and guilt as I knew she had to be up at 4 for work, because I was a little scared.

Lisa is amazing. She made a quick trip to the local convenience store for Gatorade and ginger ale.

Monday is a blur. Every muscle in my body hurt. Walking was a struggle. Lisa made sure I had all the essentials and than some. Italian Ice. Graham crackers. I was holding fluids and crackers down. Progress. A few people said it was a quick hitter. By Monday night I was thinking this would be the case.

I woke up Tuesday feeling exceptionally better. Coffee tasted delicious. The muscles still hurt (understandably so) and I tired easily, but nothing compared to the day prior. As the day progressed, I was confident. I'd take the remainder of the day to rest and Wednesday, back to my bodacious, crazy life of baking biscuits and catching up on housework and everything between.

That evening, with Lisa's help, I made a big pot of homemade garden vegetable soup. I was hungry. Soup. Crackers. Tea. It was blissful. We played a few hands of cards. I gave Lisa a rundown of all I was going to accomplish in the next few days to make up for sick time.

Today, I knew within a few minutes after getting out of bed, none of the above was going to happen. After two sips of coffee, I was on the sofa. Dizzy. A little nausea. Extreme fatigue. No energy to do anything. After hydrating myself as much as I could without overdoing it, I felt a smidgen better, but not enough to do much of anything.

I'm keeping my fingers and toes crossed this passes. It will. Eventually. However, tomorrow I'm determined to bake biscuits. There WILL be biscuits. There has to be. We haven't had a biscuit-free week EVER. It's safe to say we're not going to do nearly what we typically do in a week's time, but there will be something. We're not going to let the sweet pound pups or our Bodacious Community down. 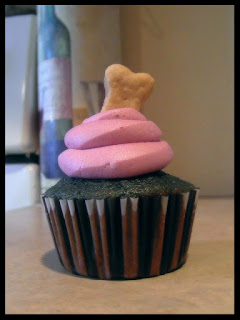 On a not-so-very side note, Coco's cupcakes, special dinner and celebration was a success. All of the fur-kids gobbled their special dinners and cupcake with gusto. That made it all worth it.
Posted by Lisa and Lisa at 10:00 PM