A Lot Can Change In A Week 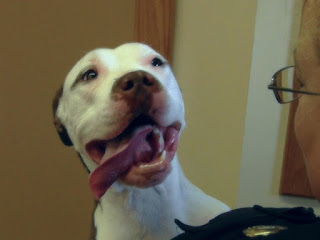 Earlier today we traveled down to the New London Pound to deliver biscuit love and donate canned dog food. This lil' cutie, sweet baby Liv, is on a soft-food-only diet for the next two weeks. She's a hungry girl! The pound is going through quite a bit of canned food and the shelves are emptying quick. We grabbed all the cans we had stashed in our biscuit room and zoomed on down to New London.

Here's another fact about your local animal shelters...they can run out of a certain item really quick. We've seen it happen dozens of times.

To better explain this, when we visit local animal shelters, before leaving we always ask if they're running low on anything or have an immediate need for a particular item. On many occasions, we're told they're all set for now. From experience, we are fully aware the word "now" can be temporary. That can change at a moment's notice.

For example, earlier this year, while delivering biscuit love to a local animal shelter, we made sure they were all set with food and supplies. Yep. Good to go. One pup and two cats were residing there. The following week, two litters of orphaned kittens were found abandoned. Hungry. Thirsty. Underweight. After being rescued, and given copious amounts of love and care, the kittens were putting on weight and thriving. However, they were almost out of kitten food.

A week prior, the shelf was fully stocked.

This happens a lot and it's why we encourage people to visit their local animal shelters once a week and ask if there's a need for anything. A lot can change in a week or even just a few days. One week the shelter is almost vacant and then next...at maximum capacity. Also, keep in mind, items needed vary from one season to the next. Obviously, during the summer months, the need for blankets is minimal, but when the cold weather season hits, posts asking for blanket donations soar through the roof.

Taking a drive to your local animal shelter (for most people) requires very little time. Whether it's 10 minutes down the road or 30, it's a small chunk of time out of your day. Your week. It's tiny in comparison to the difference it will make to the shelter and the animals residing there. They rely on public donations and every little bit helps out.