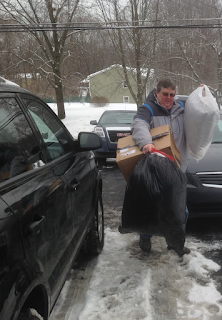 Over the 4th of July holiday, WINY Radio had updated their Facebook page with a video of the fireworks display at Owen Bell Park. Lisa and I had attended the display 3 years ago. It was...meh. Not the best display in the area. Nothing to write home about. Apparently, from the comments I read, their display has gotten worse over the past few years. People were replying with complaints. Some were quite harsh.

Amid the negative replies, a man spoke up with a simple statement in the form of a question, "What did you all do to make them better? Donate? Volunteer?" I happen to know this man. My first thought was, "Kudos to you for speaking up." My second thought? A quote from Eldridge Cleaver.

This quote is a frequent flyer in my my brain. Every single day. Several times a day. It's usually accompanied with me shaking my head, rolling my eyes or sucking in air between my teeth. I've lost count how many debates, gripes, complaints, opinions, and hateful comments my eyes feast on in a day's time. Some are warranted. Most, not so much.

In this day and age, social media has given people access to happenings all over the world. Whether it's a nanny-cam video gone viral capturing child abuse or story after story about the dentist, Walter Palmer, who killed Cecil, the virtual world is a playground for opinions. People read. They judge. Dole out harsh criticisms. Point fingers.

The problem is, most of the time, these meandering trolls have very little, if any, knowledge about what they're spewing off opinions about. Reading an article or two does not make you an expert on any subject. Watching a news video about an incident does not give you instant access to the entire story. Here's a big ol' newsflash. What you read and what you watch is only the tip of the iceberg.

One example, among dozens, if not hundreds, sticks out in my brain. Last year, an acquaintance of mine reached out with interest in making a donation for a half dozen bags of biscuits. We had a nice a nice chat about our biscuits, the fundraisers we've done, events we've participated in and how Bodacious Biscuit Love came to be. She was enthusiastic about our mission. Then, out of the blue, she asked, "Do you donate biscuit love to local kill shelters?"

I paused for a few seconds and asked, "What does that have to do with us spreading the biscuit love to our local pound pups?" The proverbial can o' worms opened up. For the next five minutes she went on and on and on with her opinion of kill shelters. I have a profound respect for people's opinions, however, if they're based solely on what you've heard in the media or through the grapevine, my attention drifts off after a few seconds.

As she ranted off her muddied opinion of kill shelters, all I could think was, "I'm witnessing the dumbing down of humanity. Right here. Right now."

Her rant was winding down. And then, it happened. Her closing statement.

"Kill shelters should be illegal. No animal should be killed for any reason. That's murder."

Prior to her closing sentence, I was going to blast her with a few facts. However, at that point, I knew it was useless. This woman is a die-hard carnivore. Her husband hunts. You get where I'm going with this? Trying to reason with  a level of ignorance that flirts with being borderline stupid is useless.

I hurried the conversation along and it ended shortly after, but not before she informed me her interest in making a donation for biscuits was null and void.

Another example comes to mind. A conversation with a family member a few years ago when Lisa and I were volunteering at a facility that rescues dogs. I had sent a photo to this family member of me squatting down on the floor. My arms were embracing a Pit Bull while my face was being slathered with juicy kisses. The photo captured his tongue going up my face. I was sportin' a grin from ear to ear.

Shortly after sending the photo, the reply came through.

"Be careful. Pit Bulls attack and kill people. Why would you put yourself in danger like that?"

Mind you, this was coming from a "hooman" who has never, not once, been in the presence of a Pit Bull. Any negative opinions or misconceptions were based on what they had read in the paper or seen on the news. In their warped mind, my decision to volunteer and engage in playtime with Pit Bulls was going land me in the inevitable hole of becoming a statistic.

Example after example is currently flooding my brain. I'll spare you the rundown.

"Our facility is not a "No Kill" shelter, and we never will be. Just like in the article, we euthanize for physical and mental health issues, and aggression. This doesn't make our shelter a bad place, or our staff horrible killers. As hard as it is for the general public to understand, sometimes euthanasia is truly the kindest thing we can do.

Please don't bash our shelter, or the animals in it. Our animals deserve just as much, if not more, support as those animals in "No Kill" shelters. After all, the animals didn't ask to be here, so why does being here make them less desirable?

I recently had an acquaintance tell me they would only adopt from a "No Kill" shelter, as though the animals here are somehow tainted by their stay. If you, the public, really want to help animals in need, make sure you support the shelters who aren't awarded the luxury of being "No Kill." Because the luxury to say, "Sorry, we won't take your animal because it's dangerous," is a luxury not all animal shelters are afforded."

Of course, I had to put in my two cents among the melting pot of replies...

"Exceptionally well said. It aggravates me to no end the amount of people who are quick to criticize and judge...and most have NO idea what goes on behind the scenes...as in what Animal Control Officers and shelter staff have to go through each and every day, the heartache in having to make tough decisions, the tears, being in the front lines, rescuing animals who have been abused, neglected and abandoned, watching dogs suffer kennel stress, working with extremely limited budgets, rallying for donations and support from the public, the long hours that go into finding these animals fur-ever homes, etc. The list goes on.

The Animal Control Officers and shelter staff I know go above and beyond their call of duty. I applaud each and every one of you. To the people who feel the need to criticize...I DARE you to walk the shoes of an Animal Control Officer for a week, hell, for even a day. If you're going to sit on your ass and criticize and pass judgement, you're part of the problem...NOT the solution."

What this boils down to is, instead of sitting on your trusty steed, tapping away at your keypad or touchscreen with hateful comments and replies, take a moment a think, "What can I do to improve this situation?"

We all have a voice. We all have the ability to get off our ass and do something big or small to contribute to the greater good. So, you've just read an article about a rescue group gone bad. Several dozen dogs and cats were taken from a facility and they're in poor shape. The people responsible have been arrested. The photos are difficult to look at.

I see stuff like this every single day. And, my blood boils. I've shed millions of tears for the animals who've had to endure such nightmares before being rescued. I would love nothing more than to have five minutes with the offenders. Often times, it takes every ounce of my being not to write up a paragraph or two expressing my hatred and graphically detailing what I'd like to do to these "hoomans" who have abused and neglected animals and made them sleep in mounds of week old shit.

I have to take a step back. However difficult that may be, I do it. Why? Because that's not going to make a dent in fixing the problem or, at the very least, assisting in the recovery of the rescued animals. My anger and hate towards these offenders will not benefit the animals in need. The offenders won't lose sleep over what I have to say.

Sure, it's an easy outlet for my anger and hatred towards what they've done. And maybe, after typing it out and posting, I'll feel a little better. But, at the end of the day, it's not part of the solution. In fact, I have become part of the problem. The problem being that I'm doing exactly what the majority of the population has done. Dished out anger and hate and then...walked away from my laptop and carried on with my day.

And that's helping how?

What I choose to do is be a part of the solution. I take my anger and hatred for the hoomans who inflict unfathomable nightmares on animals and I redirect it towards something positive. We foster. We've assisted in rescue. We have 3 rescue fur-kids who, at one time, were in the hands of shitty people who should be permanently banned from having an animal in their possession. We bake biscuits and donate them to our local shelters because fresh baked biscuits isn't a luxury shelters can afford. When shelters are in need we launch fundraisers to raise money so we can purchase much-needed items. We spend time with the animals at the shelters. We participate in events on the weekends and assist with educating the public. We promote "adopt, don't shop." The list goes on.

Our efforts wont' save the world and fix the problem, but it's an effort towards the solution. The greater good. As the saying goes, "Saving one dog will not change the world, but surely, for that one dog, the world will change forever."

If more people made the decision to become part of the solution, rather than the problem, imagine the difference it would make. The impact would be greater.

The easy route is anger, hatred and to point crooked fingers at who should be blamed.  But, that solves nothing. Instead, get up and do something about the situation. Visit your local animal shelter. Get to know the Animal Control Officers in your area. If a shelter nearby is overpopulated with dogs because of a recent mass rescue, instead of plastering pages with angry comments regarding the situation, take a trip to the shelter. Ask what you can do to help out. Volunteer your time. Donate food or blankets.

Become part of the solution. The world is already overpopulated with those who are part of the problem. Be. The. Change.