Christmas In July? Are You Kidding Me? Ah, No. 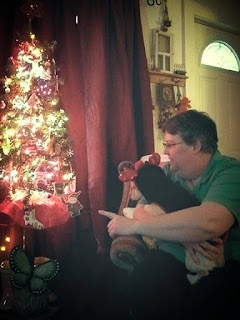 Don't get me wrong, we welcome any and all suggestions, constructive criticisms, advice on how we could do things better, etc. As I've learned over the almost-decade of doing-what-I-do-for-work, it takes many sets of eyes to see the big picture clearly. Fresh eyes. Fresh ideas. Maybe we could do this instead of that. Public feedback often produces why-didn't-I-think-of-that moments. Lots of 'em Our ears are opened. We read emails and private messages. All are welcomed.

Once in a blue moon, which might I mention is approaching in the next week or so in the world of astrology, we receive a bit of advice that strikes us as...well, worthy of a blog post. All in good humor, of course. We in no way, shape or form do we want to deter anyone from reaching out to us. This particular suggestion came from a friend of ours. Terrific sense of humor. So much so, our personal reply involved the F-Bomb. She replied with just as much candor while handing over a bag of summer tomatoes and peppers...

The topic was...Christmas in July. Our reply, minus my F-Bombs, was, "No way. Not going to happen." The entire concept of Christmas in July sends chilled nails up my spine. This response happens naturally and I have my almost-decade career to blame on that.

To back up a bit, in my line of work, the majority involves planning ahead in the marketing world. For example, right around the 4th of July, I'm knee deep in back to school stuff. August...fall shit. In September, holiday shit and Black Friday. You get the gist of it. I'm always 2-3 months ahead of the here and now.

This has gone on for years.

At times, it tends to get on my nerves. It's difficult to think, post and manage content for back to school a week into the official summer season. Not even a month later, I'm already getting affiliate emails for End of Summer Clearance Sales. With 2 months of the summer season left, I'm not exactly welcoming these with open arms. Sometimes, it's difficult to live in the moment.

I can't escape the marketing madness.

This is why I replied with a sharp tongue when our friend suggested we offer a Christmas in July special. First, we're not a business. We don't offer specials, sales or coupons. Second, I've never been a fan of Christmas in July. It's right up there with retailers offering Black Friday and Cyber Monday savings during the summer months. Lastly, I don't want to think about anything relating to Christmas during the summer and early fall season. It's summer. I want to focus on making it to the ocean before summer's end, adult slushies served up in gutted out watermelons, homemade ice cream, fresh garden veggies and swimming.

I've got 2 months to squeeze it all in. TWO months!