The Bodacious Story Of Us 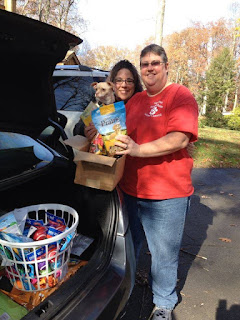 Our 3rd wedding anniversary is coming up on July 28th! In the weeks leading up to this date, we make the decision. Do we celebrate the weekend before or after? Between our busy work schedules, spreading the biscuit love, events, and other stuff, planning ahead is necessary. This year, we decided on the weekend before and on one of those days, we're hosting a Bodacious Yard & Bake Sale. We couldn't think of a better way to celebrate than to raise money so we can spread more Bodacious Biscuit, Blanket & Tote love and purchase much needed items for our local shelters.


We've been spreading the biscuit love for almost two years. I've lost count of how many people we've met since the beginning of our Bodacious journey at events, local animal shelters, rescue groups, or while purchasing supplies and out and about doing miscellaneous Bodacious stuff. We've shaken hands with hundreds of people.

When introductions are made, people frequently comment on two things. The first, we have the same name. It's a great conversation starter and breaks the ice.

For the record, Lisa and I listened to Lisa Lisa & Cult Jam back in the day.

The second is our status of being a wife & wife duo. People are curious. How long have we been married? When and where did we meet? How did we get involved with what we're doing now? The list goes on. Most people are surprised to learn Lisa and I have known each other for almost 20 years.

There are a handful who have scrunched their faces and gracefully turned and walked away after hearing one of us say, "My wife...." 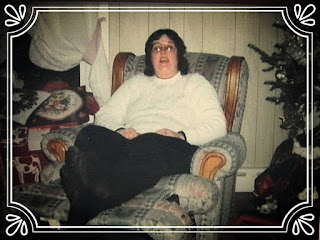 I was in my early 20's. Lisa was almost 30. We worked for the same company. There were 2 locations in town.  Lisa worked at one. I worked at the location on the other side of town. We met. Flirted. Dated. For a bit o' time we shared a life together. We were young. Too young and not quite ready to settle down. It wasn't time. We were too busy amid our main stream lives and working our way up in the company to realize the foundation, of what was to come many years later, was being laid.

Before I get too far ahead, I need to call attention to the above photo. It was taken in the mid 1990's. Our first Christmas together. My parent's house. For those who have visited our home, you may recognize the chair. I'm not sure if that chair is still in existence, but the sofa is. We have it. Yep. We're totally rockin' the 25 year old, secondhand sofa that, at one time, accompanied this chair.

After we went our separate ways, we remained friends for a little while. Unfortunately, after a heated dispute, we parted ways. I remember that day as if it were yesterday. Our eyes locked for a few seconds before I turned and walked away.  The walk from point A (when I broke the stare-down) to point B (my car), was excruciating. I could feel the hair standing on every inch of my body. Our dispute had been that heated.

In the years to follow, life happened. We both moved out of state. Shared our lives with various people. Moved on to other careers. Traveled. Although we didn't have any contact, Lisa crossed my mind every now and then. I'd hear a song from back in the day or I'd pass by something that reminded me of her, us or our home.

Little did I know, Lisa had kept me close in her thoughts as well. When back in town, she'd drive by my parent's house. The urge to stop and inquire as to how I was doing and where I was living weighed heavy. A year or so before our paths crossed again, she had been told I was living in Texas.

No. I was not living in Texas. I was working for a company located in Texas.

In August of 2010, we crossed paths...virtually. Well, sort of. My job then, and now, was primarily content management, social media, blogging, etc. I was at my desk, online, for over 16 hours a day. I searched. There she was. Photo and all. It took a long time to gather enough courage to send a friend request. Later that evening, denied. I was flooded with a mix of emotions. Reality set in. It had been over a decade since we last spoke to or saw each other. Too much distance to bridge the gap. Life went on.

Two months later, October, while visiting family in NH for a week, Lisa reached out with a friend request. I accepted. I learned she had been living in Connecticut, but was visiting her parents who lived only 15 minutes away from where I was staying in NH. She learned I was living in Ohio and vacationing in NH for a week. Lisa asked if she could pick me up and buy me a cup of coffee.

Once again, we went our separate ways...her to Connecticut. I flew back to Ohio. However, we stayed in touch. Lisa more than I. Her emails went unanswered most of the time. Then, in January 2011, weird things started happening. Big changes to those around me. Unexpected. Long bouts of reflecting. Perspective. Frequent moment of clarity. Lots of stuff. Very noticeable. I reached out to a dear friend of mine. I had no idea what was going on. After my rant, she said, "The universe is shifting."

Lisa and I began communicating, almost daily, via email. The first or second week of March, Lisa called. It was the first time we had physically spoken to each other in over 10 years. Within 5 minutes, our conversation flowed as if no time had passed. From that point on, we talked everyday, emailed, instant message, etc.

The universe was definitely shifting. Lots of shimmy shakes. Long story short, I purchased a one-way ticket the end of May. A month later, Lisa and I stood face to face at the airport. There are no words to describe that moment. 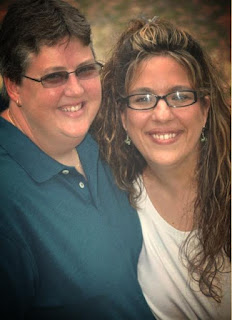 The following summer, we were married. While Lisa was reciting her vows, one of the many things going through my head was, "Never in a million years did I ever think we'd see each other again." Even if we had been in the same town, at the same time, at the same location, it would never happen. But, there we were. Once again, face to face. Eyes locked. Reciting our wedding vows.

The rest, as they say, is history. 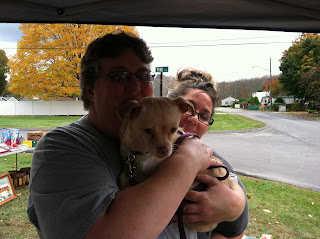 Our involvement with rescue began in the fall of 2011...only a few months after I made the one-way trip home. It didn't take long for Lisa and I to realize we shared the same passion for animals. For a while we volunteered a couple of times a week working with rescue pups and assisting with socialization, training, and general care. As our involvement increased, our mission and path became clear. Bodacious Biscuit Love was born in the fall of 2013. 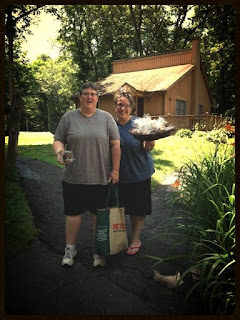 The journey has been nothing short of amazing. That's not to say there hasn't been obstacles and hardships. Like with any mission and efforts towards the greater good, the waters aren't always calm. Things can get rather hectic. Sleep deprivation hits often. There aren't enough hours in the day. Occasionally, we get a little snippy. However, through it all, we've persevered. Face forward. Onward march.

One of the many components I thoroughly enjoy about Bodacious Biscuit Love is Lisa and I are doing this together. It's an us thing. There's a great deal of balance between the two of us. Some components, one does, but not the other. For example, I manage the blog site and social. Lisa ships, delivers and makes sure we've always got supplies on hand. Yet, a good portion, are shared tasks. Baking. Making labels. Events. Packaging. Visiting shelters. Etc.

We're extremely fortunate the other shares the same passion. And, we're able to work together. That's half the battle. When it's 90 degrees outside and we have the oven on, even with 2 air conditioners, it gets hot in here. Top that off with exhaustion, our crappy sleep schedules, work, and maintaining our household and family of 3 fur-kids...it's not easy. But, we do it. Day after day. Together.

We wouldn't change a thing...