My Bodacious Version Of The Quintessential Vodka Gimlet 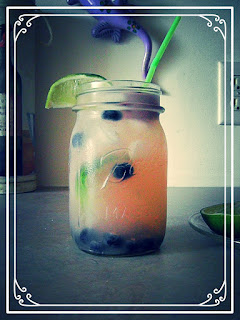 There's a woman I've come to admire many times over. Her name is Felicia and she's the founder of Puppy Love For Death Row Dogs. My admiration doesn't stem solely from her phenomenal efforts towards the greater good. There's a tremendous amount also stemming from her candor. It won't take long to pick up on that if you read her updates on Facebook. I read 'em all. Word for word. In the raw. You read it. You feel it. You see it. Felicia takes you with her in all she does, experiences and witnesses.

It's been my nature to sway from the rawness of life when I compose columns for this blog site. I choose to focus on the good. After all, the messy stuff will always be there. We should be embracing the positive. The goodness in life.

Not to be mistaken with sweeping things under the rug.

While fixating on the positive stuff at the end of the day may seem somewhat effortless most of the time, there are occasions when messy stuff hits like a wrecking ball. Unexpectedly. It. Just. Happens. When it does, it warrants a few days of slowing down. Time away. When this occasionally happens, I have two choices. Explain the absence or pick up where I left off.

This is when Felicia's candor pops into my brain. Nothing is left unsaid. No one is left hanging or wondering. Did I mention how much I admire this woman?

On Monday, I received a phone call. My Grammy passed away two days prior. As. In. Two. Days. Had. Gone. By. Since. My. Grammy. Died.

I was just hearing about this now? Ahem.

Out of respect for my Grammy, I'll refrain from opening the proverbial dysfunctional-family-can-of-worms. What I will say is I had anticipated this news for a bit of time now. Grammy was diagnosed with cancer the fall of last year. She had been given less than a year. The sadness lingered.

When I received the call on Monday, my day's activities came to a halt. I sat outside for a bit. Tears. Lots of them. I didn't give a shit if the neighbors saw my drenched face. The conversations to follow with a certain family member didn't sit too well with me either and left a bitter taste in my mouth. The entire day was a melting pot of emotions. So was the next. And the next. To be expected.

My Grammy was an exceptional woman devoted to her family. Time spent with her and my Grandpa, who passed away almost 20 years ago, were memorable. They were hardworking, honest, simple and they appreciated what they had. Most of my favorite childhood memories are ones that include my Grammy and Grandpa. Gardening. Tomato sandwiches. Green pepper pizza. Percolated coffee. Pancakes made in the cast iron skillet. Knitting. Crocheting. Walks to the pond. Forts in the woods. The baseball field. M&M's. Grammy doing her best to convince me there were no onions in the salad. Crossword puzzles. Readers Digest. Paper grocery bags full of novels. Christmas dinners. Sheets and blankets dried on the clothesline.

And, we can't forget the quintessential Vodka Gimlet. Grammy had the art of making a Vodka Gimlet down to an exact science. She used only one brand of vodka and bottled lime juice. The additional fresh limes had to be "just right." I don't remember anyone ever making her a Vodka Gimlet. She. Made. Her. Own. Drink. On occasion, when she ordered one at the restaurants she frequented, if she didn't know the bartender, she would stand at the counter and tell the bartender how to make it. She watched their every move. They always complied.

About 15 years ago, when Grammy was visiting, she asked if I wanted a Vodka Gimlet. She was standing at the kitchen counter measuring ingredients and squeezing the fresh limes. I hesitated a bit. Not too many people could drink her Vodka Gimlets. The ones who did had stories to tell. I wasn't going to back down. After Grammy did her thing, she handed me the glass filled with her magic potion. We clinked glasses and I sipped. I was an amateur. I added ice. Lots of it. It was my first Vodka Gimlet...and last.

In the years to follow, I learned vodka induced severe headaches. It's not something I'm able to drink. I never got the chance to warm up to her Vodka Gimlets.

On Tuesday, I made my version. Rum. Lots of fresh squeezed limes. A splash of lime juice. A little pink lemonade. Fresh blueberries and cherries. It didn't come close to my Grammy's Vodka Gimlet. However, the thought was there. We saluted our Grammy. Celebrated her life. Looked at photos. Spoke of the memories from decades ago until recent.

As the week dwindled on, I made peace with the loss. The sadness. What lingered were the harsh words and insults directed at Lisa and I. Once again, our decision to dedicate our life towards rescue, fostering, spreading the biscuit love, providing much needed items for local shelters, etc were criticized. Those words are difficult to shake off. Although we've heard 'em before, and both family and friends have distanced themselves or severed ties, whether it's our decision or theirs, the sting and bitter taste afterwards doesn't get easier to handle.

Those are the messes that will always be there and the ones more challenging to trudge through. I no longer explain myself or what we do or why we do it. It's fruitless. My words hit a brick wall. They've already formed their etched-in-granite opinions. Anything I say is only adding fuel to their fire. I usually hang up.

It's weeks like this where I need to take a breather. Slow down a bit. Sit. Just be. Exhale. Allow myself to take a few rides on the infamous emotional roller coaster without guilt.

Get it out. Release.

Despite the emotional train wreck of a week, there wasn't a biscuit love hiatus. We baked a few batches of biscuits. Filled our displays. Spread a little biscuit love. Visited one of our favorite animal shelters. And, we took home a foster kitten in poor shape. Although it wasn't what we typically do in a week's time, it was something.

I'd like to think my Grammy is proud of us and what we do. Sadly, over the past couple of years, I didn't get to spend as much time as I would've liked with her. There were "roadblocks" and a slew of other yucky stuff that accompanies decades of family dysfunction. The time I was able to spend with her is what I will hold on to. The many wonderful memories I have of her and my Grandpa will always be there. No one can take those away.

I lift my glass to you, Grammy. Cheers!