And Let Us Finally Introduce To You Our Lil' Lobo 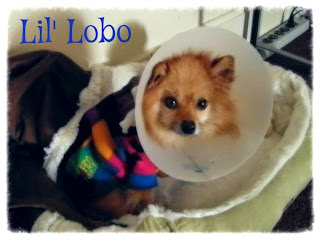 I've mentioned Lil' Lobo countless times in our blog columns and included a few photos of him assisting with biscuit deliveries. This lil' nugget of love is a special pup who entered our life back in January. Mind you, we were not looking to extend our family. Two hoomans, two rescue fur-kids. Biscuits. Work. Very seldom a dull moment. We embraced each day as it came. The thought of expanding our family never crossed our minds. Then...

The 3rd week of January, we were informed of a pup who had been rescued by one of our local ACO's. Details will remain confidential. What matters is once rescued, he was safe. In good hands. Hospitalized. He received the medical treatment desperately needed and had been for quite some time.

There were a few "close calls."

On January 23rd, this pups, who we named Lobo shortly after his arrival, was transported to our home for fostering. He had been in the hospital for almost 3 days. The day before his arrival to our home, he had endured major surgery to remove one of his hind legs. 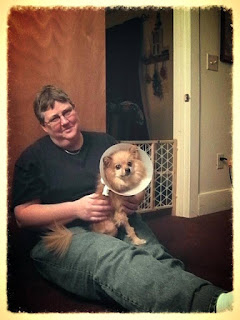 We volunteered to foster him due to the level of care he needed after his surgery. At that stage in his recovery, he needed 'round the clock care. I work at home. Most of the time I sleep a few hours here and there. Staying up all night and going without sleep for extensive periods of time is not foreign to me. In fact, it's quite the "norm."

I'll never forget the knock on the door the morning of his arrival. I knew he was en-route. But, to have seen the photos and receive updates prior to his arrival...words can't express the emotions running through my body. I opened the door and there he was. Tiny. Curious. Slightly frightened. Nervous. Cone head. He was laying in a doggy bed. His transporter cradled the bed in his arms. We went over medication regimens and a few bags of supplies were handed over like food, blankets, medical supplies, etc. 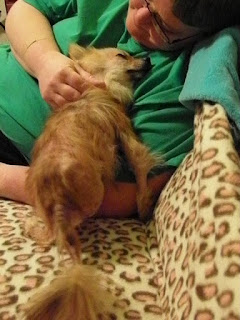 Twenty minutes later, Lobo was settled in. What a sight for sore eyes. Most of his fur from the neck down was gone. He had tufts of long, scraggly hair on his body along with a copious amount of scabs...some deep. Lingering flea dirt (in lament terms...flea shit) was caked in what little un-groomed fur was on his body. Not a single flea was left, however, because he had been infested, the flea dirt was widespread. And, he stunk. Due to his condition before and after hospitalization, bathing him was not an option until suture removal.

After getting Lobo's bed and blanket situated, I crept down on the floor. On my tummy. I wasn't sure of his demeanor in a home environment or how'd he react. Lobo immediately ran to me and mashed his face against mine. His cone head made that slightly awkward, but in that instant, we bonded. Now that I look back, it was probably his way of saying, "You're my hooman now." I stayed on the floor with him for about a half hour. Shortly after, he tired out and fell asleep in his bed until Lisa arrived home. Lobo had the same "moment" with her a few seconds after she got down on the floor.

It was love at first sight. 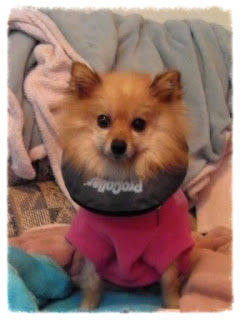 In the days to follow, Lobo glided down the path of recovery. He ate with gusto, moved around with ease, and we discovered early on he was fully house trained. I stayed up through the night looking after him. When Lisa left for work at 5 in the morning, I'd take a nap on the sofa with Lobo. He'd curl up on my chest or sprawl out on the blanket beside me. In the evening, Lisa took over so I could nap for a few hours. We took turns massaging his body to ease the itching and pick the loose scabs embedded in his fur.

During this time, Sophie and Coco were curious about this lil' 5 pound nugget of love who resided in our office most of the time. They didn't growl at him or bark. It was quite the opposite. They wanted to interact with Lobo. A few times, we allowed interaction while Lobo sat on my lap or Lisa's. Like with us, it was love at first sight. Lisa and I were both in awe. Although we sensed there wouldn't be an issue, full interaction would be permitted after Lobo's sutures were removed. 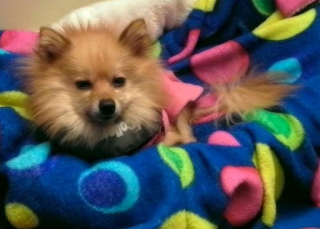 A week and a half after his arrival, that's exactly what happened. Lobo had his sutures removed. We immediately gave him a bath. And, the gate was lifted. Lisa and I sat on the sofa and watched. We were speechless. It was as if the 3 of them had been living together for years. Our eyes locked. I think we knew then the inevitable. However, neither one of us spoke.

A few days later, while sitting at my desk, I made the decision. Lobo was resting comfortably in my arms. His head nestled underneath my chin. It was time. One of us had to speak up and say it. Lisa and I are both stubborn. We had been feeling it for a while now. It was just a matter of who was going to say it first. 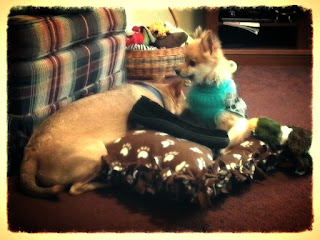 I approached Lisa in the kitchen. My throat had already tightened. Tears ran down my cheek before I could get out the first word. Fifteen minutes later, we were both in tears. The universe had shifted a bit. A shimmy shake of sorts. Fate stepped in. Lobo had chosen our lil' family. In every way possible it had been apparent. That in itself was an honor.

We were now a family of five.

In the weeks to follow, Lobo continued down the path of recovery. He gained 2 pounds. His fur grew back. There was one spot on his back that had taken a little longer. We were almost certain he'd have no fur on that one area (we suspect it's an old scar) and would have to wear a shirt to protect that one area of skin from the elements. However, peach fuzz appeared. Then, fur! In February he went for his first groom. What a transformation! 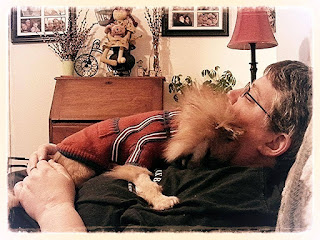 Despite only having one hind leg, Lobo has no problem getting around and running the length of the yard. However, because of his size, there are challenges. He is not able to jump on the chair, sofa or bed. Lobo has no issue going down the porch or back stairs, however, getting back up is a problem. Most times we have to carry him. In addition, he has trouble on soft, uneven surfaces and linoleum flooring. He's wiped out many times.

Lobo is full of life and loves to play. His favorite inside game is fetch. And, he distributes our shoes to all 3 doggy beds. I've never seen a pup do this before. If there are 6 pairs of shoes in the kitchen, within an hour, he'll have them strategically placed by the doggy bed in the office and bedroom or the pet pillow in the living room. Usually, accompanying his collection of our shoes, is a pile of Skinneeez dog toys. 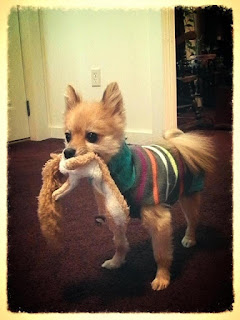 Very seldom do I look at him and think, "He's a special needs dog." But, realistically, he is. It's been a learning experience for all of us. We've learned his language. He makes various noises to let us know if he wants to jump up on the sofa or living room chair. There's a different noise for when he wants snuggle time on our laps. If there's an itch he can't reach on his back, he'll twirl around on his bum and make a noise. It almost looks as if he's break-dancing. On occasion, when his ear itches (the one he is unable to scratch), Lobo will put his head close to our face and shake it.

The first few times he did this, I couldn't figure out what was wrong. Why was he shaking his ear back and forth against my nose?! It didn't take long for me to realize he was unable to scratch it because there was no hind leg to scratch it with. 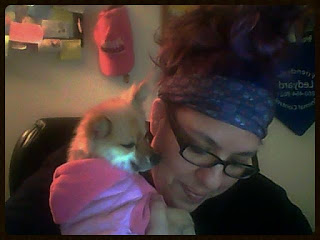 Lobo's hind leg tires easily. We suspect it had been injured at one time due to a scar on the bottom. When he has an active day, by early afternoon, he struggles. During these times, he's unable to perch himself up or run around and it's hard for him to get comfortable. When Lisa and I eat dinner at the table or play cards, we bring the pet pillow in for him. Hard surfaces are uncomfortable. 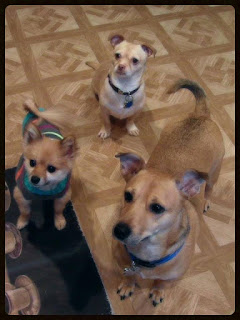 It's been four months since Lobo arrived at our home and became part of our family. Life certainly has changed. As I reflect back to that moment in February when our family went from four to five, we knew that was inevitable as it was when we adopted Coco and, two years later, sweet Sophie. With each addition, life changed. It wasn't something we discussed. We didn't "weigh the pros and cons." Not once did we say, "Well, if we adopt Lobo we're not gonna be able to do this or that or take off for the afternoon just you and I..."

None of that mattered. With all 3 of our fur-kids, the moment had presented itself. The universe shifted. Fate stepped in. They chose us. Any changes we had to make were nothing in comparison to the greatness each fur-kid has brought to our family. 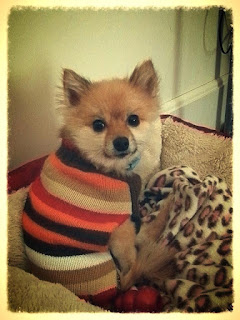 Lobo is a remarkable pups and he's made great strides in the past four months. Pups with physical challenges are more than capable of living a full and happy life. Our little guy is proof. He keeps up with his brother and sister. Some days are more challenging than others, but he gives it his all. And when his legs need a rest, he'll stretch out on his pet pillow and chew a bone. Most times Coco joins him. He understands.

While the boys are chewing their bones, Sophie is usually stretched out on the bed enjoying the luxury of having it all to herself.