We Finally Cut The Cord 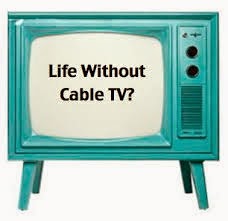 Today we did what some might consider "the unthinkable." We cut the cord. Cable. We had been talking about it for quite awhile. I'm not even sure who mentioned it first. Or when. As the weeks and months rolled on, the topic began to surface more frequently. It was usually during what little time we sat and watched TV. Very little captured our interest. Repeats. Maybe it was our timing.

On the overnight, I'd usually turn the TV on between 3-4 to unwind from work stuff or baking. I've learned, over the years of working at home, that shutting down and immediately going to bed resulted in a long stint of tossing and turning.

Imagine coming home from an 8-12 hour shift and going directly to bed. And by directly, I mean as soon as you walk through the door. Shut.it Lock it. Walk to the bedroom. Change into your pajamas. Crawl into bed.

To prevent these bouts of self-induced insomnia, I'd turn the TV on. Repeats. Paid commercials. Ridiculously stupid shows. During that hour, I'd end up spending most of the time in the kitchen getting Lisa's lunch ready. Making breakfast. Tidying up the house. Anything that wouldn't make too much noise.

Finally, during a game of cards, the topic of cable came up once again. This time, the conversation extended to, "We really need to make a decision. Now." The end of the month was approaching. When all was said and done, it boiled down to 3 things...

1. We're paying almost $100 for a service we don't use or enjoy. That was the price without all the bells & whistles of HBO and Showtime. On average, we watched about 2 hours of TV a week. That's 8 hours a month. Could we justify spending $100 to watch 8 hours of TV that we weren't enjoying in the first place. No.

2. Aside from the occasional episode of Criminal Minds (which has sucked for the past couple of years), North Woods Law or Mike & Molly, what else were we watching? Nothing. Why? If we want to know what's happening in the world or anything weather related...it's all online.

Which, I should mention, we have awesome internet service through our cable company. We pay $60 a month and we're online 'round the clock. We're definitely getting our money's worth.

3. We're not living in the 80's or 90's. Cable isn't the only option. Yet, when you consider what's out there for services, cable tends to be at the top of the list for the most expensive.

We chose a date. April 1st. Lisa stopped at the cable company on the way home from work to let them know and to make certain the transition wouldn't interfere with our internet service. The cord was getting cut. It was official.

For the entire week, leading up to our new cable-free life, I made sure the TV stayed off during the time between work and crawling into bed. I had anticipated this taking some willpower. Much to my surprise, it didn't. I felt slightly relieved. Instead, I reached for a magazine. The following night, I started reading a book I had purchased several months before our wedding.

On the third night, something remarkable happened. I sat on the sofa completely unplugged. No laptop. No phone. TV off. Aside from the subtle household noises, it was quiet. There were no distractions. I actually thought about what that meant. No. Distractions.

For me, it means one thing. Unplugged. No noise.

In my world, for the past almost-decade, technology has been my habitual distraction. It's what I do for work. My eyes are glued to a monitor. Laptop. Chromebook. Phone. Even when I'm not working, they're still gazing at the monitor. News. Catching up on blogs. Weather reports. Twitter. Pinterest. Facebook. While most of this is work related, at times, it's not. When I shutdown, my eyes shift to the TV.

I never unplug and sit in silence. Without distractions. In this day and age, I don't think very many people do.

In the day or so before our cable service was discontinued, I didn't feel the need to have a TV marathon. There wasn't an urgent, "Let's get it all in before April 1st" moment. Is it wrong to say that I was looking forward to TV not being an option? In addition, less remotes and more money in our pocket every month.

Why didn't we do this sooner?