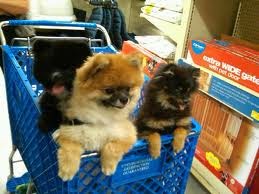 Last week, Lisa and I brought Lobo to Grimm's Furry Tails for his first spa day. Bath. Groom. Nail trim. The works. We had a couple of errands to run on the way home. The first was a trip to PetSense in Norwich. It's a given we could take Lobo into the store with us. It's a pet supply store. Our second destination was Walmart. On occasion, we've seen small dogs nestled in carts while their "hooman" shopped. I don't recall ever seeing a sign stating dogs were not allowed in this particular store.

We sat in silence on the way to Walmart. Our brains were debating the same thing. I broke the silence.

"Are dogs allowed in Walmart? Do you think they'll say something if we take Lobo in with us?"

"I know he'll be fine, but what if we're confronted by an associate and they tell us Lobo isn't allowed in the store."

"Then, one of us will take him back to the car and wait while the other shops."

"But...if there isn't a sign saying dogs aren't allowed and someone tells us he's not allowed in the store, you know what's going to happen."

"I'll give the store associate a piece of my mind."

"I'll wear my jacket and zip it up halfway. Lobo will fit inside. He can peek his head out. It'll be like those frontal baby wrap thingies."

"I could swaddle him in his blanket. People will think I'm holding a baby."

At that point, Lisa looked at me and smiled.

"How 'bout I drop you off at home and I'll make a quick trip to Big Y? It's getting cold. You can snuggle with the kids until I get back."

Decision made however, my brain was still wrapped around the big question...is Walmart a dog friendly store? Like with so many other things, this minuscule thought turned into something much greater.

What stores are dog friendly?

In the process of locating an online list, I stumbled on '19 Dog-Friendly Stores Where You Can Shop With Your Pup.' I was quite surprised with some of the stores listed. Gap. Old Navy. Pottery Barn. Macy's. Barnes and Noble. The list goes on and it doesn't stop at the 19 listed in this BarkPost article.

The article does state that most stores leave it up to the manager whether their location allows dogs or not. In other words, if you're planning a trip to Old Navy, be sure to call ahead just to be safe.


Do you know of any additional stores, aside from the obvious like Petco and Petsmart, that allow dogs? Let's start a list!