Thank You For A Bodacious First Year 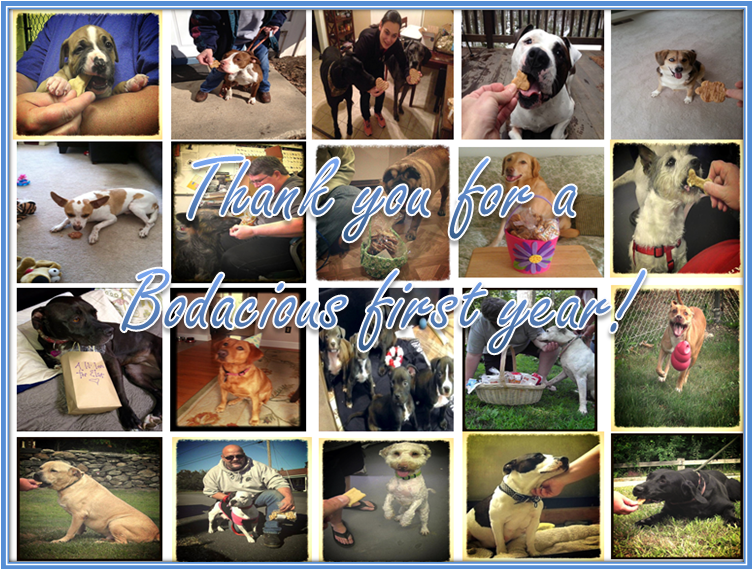 For those who have taken a few minutes to read Our Story, you have a general idea how Bodacious Biscuit Love transpired into what it is now.  It was hard to pin down the exact moment when it all started. Was it the first time we experimented with dough or when we delivered our first batch of biscuit love? There were so many contributing factors to Bodacious Biscuit Love coming to life.

When all was said and done, we chose October 15th. A year ago, right around this date (give or take a day or two), I was assisting some friends with their new business on the social media, website and marketing front. To jump start community participation, we launched a costume contest. The prize? Biscuits.

We reached out to a gourmet biscuit place nearby and asked if they would like to donate the prize in exchange for some free advertising. Both businesses (the one I was assisting and the biscuit place) are local and run by like-minded people. We received no answer. After a week, it became apparent they weren't interested.

I'm not going to lie. I was somewhat put off. We weren't asking for an elaborate prize with a $200 retail value. At most, maybe a bag or two of gourmet biscuits or a $20 gift card. And, to boot, I was offering something in exchange. Free advertising for a couple of weeks. In my field, that comes with a substantial price tag. Their loss.

I ended up making the prize basket filled with gourmet, Halloween themed dog biscuits. We were still in the experimentation stage. The dough we used then isn't what we use now. That came about a month later.

The contest and prize was a huge success. A month later, we ran another contest and we provided the prize. The rest, as they say, is history.

And today...we celebrate Bodacious Biscuit Love's 1 year anniversary. Over the course of the past week, I've sat at my desk going through the hundreds of photos uploaded over the past year. We've spread the biscuit love to SO many pups, local shelters and to those who foster and rescue. In addition, we've launched some fundraisers to purchase much needed supplies for these local shelters. The connections we've made with some rather fabulous people has been nothing short of phenomenal. There has been an endless stream of goodness all the way around.

This entire year has changed us in more ways than one.

That's not to say we haven't hit a few roadblocks. We have. We're human. We've had moments of complete frustration and stress. During the first year of any new adventure, it's a constant state of trial and error. Biscuits have been baked through all four seasons. We know what works, what doesn't and we've made some recent changes lately based on that.

Through it all, we've pulled through with flying colors and we couldn't have done it without our Bodacious community. Our motto has been, and always will be, "great things are done by a series of small things brought together." It takes a community of like-minded people and a copious amount of teamwork to spread the biscuit love and launch our fundraisers.

Each and every member of our Bodacious community has played an important role in that...whether it's been a donation for bags o' biscuits, spreading the word, participating in fundraising events, getting us hooked up with events and providing support in countless other ways. Without our Bodacious community standing beside us, none of this would have been possible.

We are looking forward to another successful year ahead of spreading more biscuit love to more shelters, extending our locations for displays, booking more events and launching more fundraisers to provide shelters with food, toys, cleanings supplies, etc.


We're raising our coffee cups to YOU with a world of thanks and lots of hugs and love for making Bodacious Biscuit Love possible!