A Few Questions I'd Like To Ask Andrew Zimmern 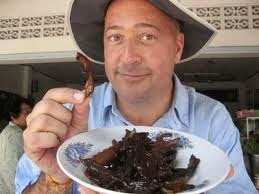 I don't have a cushioned schedule and 95% of the time, my brain doesn't enter the sleep zone until after 5 a.m. I'm used to it. One thing I've learned in the past almost-decade of working at home is that shutting down my laptop and immediately crawling into bed is a bad idea. There needs to be time between work and bed for the mind and body to relax and unwind.

There isn't much to do around 3 in the morning to unwind. A stroll through my small town is out of the question. I cancelled my dozen or so magazine subscriptions years ago. Housework is too noisy. I'm too exhausted to bake. Options to entertain myself with something other than work is scarce. So...TV it is.

I gravitate towards the Travel Channel. Bizarre Foods America with Andrew Zimmern is on most days. I have a love hate relationship with this show. Learning about various cultures and their choice of nom noms intrigues me. Who knew you could get fried chicken necks from a street vendor at 2 in the morning only yards from where ladies of the night strut their stuff? On the flip side, at least once or twice throughout the show, I have to mute the sound and squish my eyelids shut. There are just some things I cannot stomach.

Regardless of whether I can get through a narrow 15 minutes or the entire show, my curious brain is churning away. I have questions. Lots of them. How can anyone sit and watch Bizarre Foods America and not have questions or concerns.

1. Food Poisoning - You've traveled to some rather remote areas that are completely void of modern conveniences. The first thing that comes to mind is refrigeration. As a cook who spends a copious amount of time in the kitchen, I am well aware of the importance of sanitizing, appropriate temperatures and the proper way to handle certain foods. In a lot of episodes, food preparation, compared to that in my kitchen, is a nightmare. Have you ever suffered from a bout of food poisoning from consuming 1 year old fermented fish or other less-than-ideal food handling?

2. Gastrointestinal Issues - It's probably safe to assume you have an iron clad stomach. If you can nosh on rotted fish, maggot infested cheese and pickled pig balls, your stomach is worlds beyond anything I could handle. Granted, you've been doing this for a long time however, there has to be some gastrointestinal issues, right?

3. Mental Anguish - Experiencing different cultures must be absolutely fascinating for you. On top of that, they welcome you, show you the ropes and invite you to eat at their table. I've seen you extend the utmost gratitude for this, especially in poverty stricken areas where food is scarce. Have you ever been presented with a food, situation or endeavor in which you've instantly thought, "What. The. Hell. Is. This?" It's like Christmas morning when you open a gift and you're instantly required to put on your best poker face.

4. Family Life - You're married, right? I've seen one episode in which your wife accompanied you to a remote tribal area in the jungle. I'm guessing she doesn't journey with you to the corners of the world much. Or maybe she does and she's standing with the camera man while you crunch your way through a beetle the size of my hand. How does the married life hold up when you're always on the road? I can't imagine telling my wife I have to leave for 2 weeks because there's year old pickled donkey testicles to be eaten overseas.

5. Comfort Foods - For me, comfort food warms the soul and it's a mix of dishes I grew up with or have fallen deeply in love with over the years. I have converted most of these tried and true favorites to vegan. You've tasted some of the most grotesque foods out there. When you need a comfort food fix, do you move mountains for a sliced tongue taco or gravitate towards basic fare like spaghetti and meatballs or macaroni and cheese? I say "basic fare" because I wonder if foods like pasta, burgers and french fries seem undoubtedly boring to you by now.

6. No Way - I can't begin to fathom what would possess someone to eat what you have episode after episode. I get the whole point of experiencing a world of cultures and broadening your horizons. I do. I'll be the first to admit, as a society, we're wasteful. Our culture doesn't embrace feasting on the entire animal or digging up root vegetables or picking mushrooms in the jungle regions. Has there been anything in your travels that you've flat out refused to try?

7. Fear Factor - Remember that show? It was a mix of daring stunts and ingesting grotesque foods in the whole or drinking them after a few twirls in the blender. This was another show I had difficulty watching because most times, there would be a sudden vomit session after the first bite or sip. Has there been an incident where you've put something in your mouth and suffered an immediate bout of projectile vomit?

8. Off Camera - You're human and the body requires nourishment periodically throughout the day. As much as you're on camera, you have hours when you're not. What do you chow down on during your off time? Let's say for a Sunday breakfast or a late Friday night dinner?

9. Sweet Tooth - Most of us have one to varying degrees. Some folks need a sweet treat after every meal while others indulge once or twice a month. Your show is lacking in the dessert department. When your sweet tooth beckons you to the dessert table, what's your favorite go-to pick?
Posted by Lisa and Lisa at 12:14 AM